Six years ago, back in 2005, I wrote a series of essays on road safety statistics in Israel. With six more years of data available, and the subject resurfacing lately in the Israeli media, it's time for an update.

To get the most out of this post, please read (or reread) at least the first two of my original essays. I'll be here when you get back.

With data now available through 2010, what has changed?

If you had asked me then what I expected the data to look like in six years, I would have anticipated a continuation of the established trends: steady, gradual improvements in the fatality rates, with occasional setbacks along the way. The trend in total fatalities is harder to predict, as it depends on the interaction between the falling per-kilometer rate and the rising total distance driven. Given the tailing off of the post-Soviet immigration, I might have anticipated a modest fall in total fatalities, but now I'm second-guessing my former self.

So what actually happened?

Based on the data through 2004, I wrote: "Annual fatalities have been stuck at 450-550 for over fifteen years now." Already, we see a significant change (click image to enlarge): 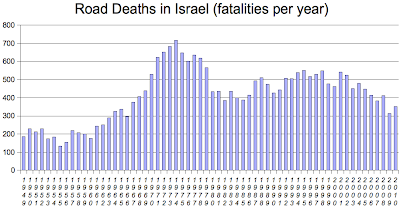 Unfortunately, in 2010 the number bounced back up to 352, and it looks likely to exceed that in 2011. This is an example of what statisticians call regression toward the mean. When a statistic trends in a particular direction, sometimes it will overshoot its long-term trend and sometimes it will undershoot it. While it may appear to have gotten much better and much worse, in fact it mainly reflects random variance around its trend line. (Even while total fatalities remained largely stable between 1987 and 2004, the total changed by as much as 17.5% a year in either direction.)

In 2005, I noted that fatalities per capita had showed a gradual improvement since 1980. The 2004 figure was 7.0 per 100,000 population, falling at an average 1.6%/year over the preceding five years. It would have been reasonable to expect that trend to continue.

But the decline not only continued, it accelerated:

Over six years, the fatality rate per capita improved by 34%, falling an average 6.7% per year. That's over four times the decline rate of the previous five years.

In 2004, fatalities per distance driven were at 12 per billion vehicle-km and falling at 2%/year. As with the other figures, this too showed a dramatic improvement through 2010: 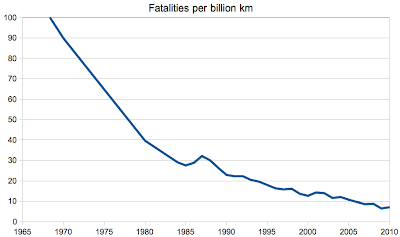 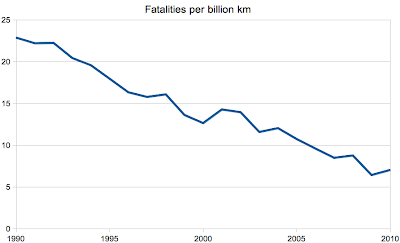 So if anyone tells you that road safety in Israel is again getting worse, now you know the facts. The recent deterioriation is a short-term statistical fluctuation greatly overwhelmed by dramatic long-term improvements.

I'll save the international comparisons for a followup post. Brace yourself for more good news.